Vidushi Smt. Soudamini Venkatesh is an accomplished Hindustani Classical Vocalist blessed with a sonorous and mellifluous voice. She is an All India Radio artist and has two audio cassettes and cd’s to her credit. She has performed on many prestigious platforms in India and she has extensively toured the USA and Canada. She has conducted lecture-demonstrations that have been very well received. 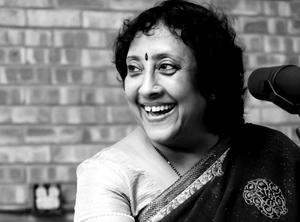 Soudamini imparts training to many students at her residence in Bangalore. She heads an organization called “Aarohi” which provides a platform for up and coming artists from all over the country as well as established performers in an effort to promote music and encourage youngsters in the arts. She has been involved in developing many educational programs like “Interpreting Raag Maala paintings”. As a trained Bhartnatyam and Kathak dancer, she has choreographed dance and music recitals.